Many persons who do not know the workings of Crime Stoppers in Trinidad and Tobago will nevertheless know its toll free number 800-TIPS.

This year, Crime Stoppers is celebrating its 12th anniversary since inception in 1999. Since that time, the Chamber has continued to be a supporter of the organization. 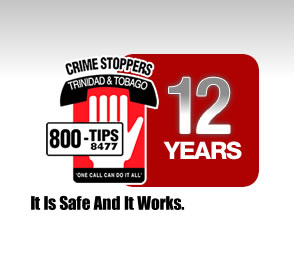 At present, having undergone several changes it remains a fully independent entity. Today, the Chamber takes the opportunity to congratulate Crime Stoppers for its role in crime fighting in Trinidad and Tobago.

Crime Stoppers was established at a time when Trinidad and Tobago began seeing increases in its murder rates and also started grappling with the ‘newer’ crimes such as kidnapping. Today, more than ever the organization remains of utmost relevance, given the present level of crime and its impact on the conduct of business in T&T.

It is no news that the Police Service is suffering from a crisis of confidence. Community intelligence is critically low, as the public perception is that there are pockets of corrupt officers within the force, therefore information provided to them is insecure. It is here that organizations such Crime Stoppers play such a crucial role, providing an avenue to give information confidentially and to track it’s progress.

By simply calling Crime Stoppers, each citizen can become involved in helping to reduce crime in our country.

On average, just over 100 persons are arrested annually as a result of tips received through Crime Stoppers. Since inception more than 15,500 tips had been received and in excess of 1,200 arrests made. In addition, in excess of $11.9 million worth of stolen property was been recovered, and 7,228 cases cleared. Pretty good results for a civilian-based organization. This certainly confirms that the programme is working, but given the continued unsatisfactory levels of crime and a detection rate of merely 12-14%, it would be good to see more engagement from the public.

The strength of the Crime Stoppers programme is its confidentiality. It has been operating around the world for almost 35 years, accepting anonymous tips and relaying them to authorities, and the identity of a person has never been breached. It supports the work of the police by
passing to them all the tips received, since they are the ones with the resources, expertise and mandate to follow up on these leads.

The T&T arm is supported by Crime Stoppers International with knowledge sharing of over 1,200 similar programmes in more than 25 countries worldwide. It is funded by donations and goodwill from corporate T&T, the Government and other fundraising activities.

Recently, Crime Stoppers improved its website at www.crimestopperstt.com making it easier to submit online tips if this method is preferred. The software for submitting tips has been in use worldwide for several years and is guaranteed secure and anonymous as submitted information is encrypted directly into the application.
Tipsters can return to securely add information to the original tip or ask about rewards. In addition, a Facebook page has been established where
discussion is facilitated, but no tips taken. The organization is currently exploring even newer, more innovative ways to carry out its mandate with our younger more technology savvy citizens.

As the Chamber joins with Crime Stoppers in celebrating its 12th anniversary we look forward to even better results as the lives of our citizens are improved.