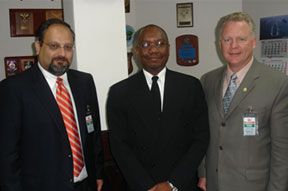 Walrath’s visit was a testament to the spirit of collaboration and global commitment to the eradication of crime and terrorism.

As President of CSI, Walrath oversees 1,200 programs in 20 countries. He is also Chairman of the Board of the CSI Foundation. In addition, he was instrumental in CSI receiving official United Nations consultative status on crime initiatives and is credited for the recognition of the organisation by bodies such as the FBI and Scotland Yard

His optimistic messages of hope and the value of human life have inspired thousands in the spheres of business, education and law enforcement