The Trinidad and Tobago Police Service has come in for high praise from the local CrimeStoppers as the organisation has snagged awards from CrimeStoppers International. 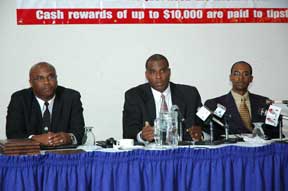 The awards were distributed at the recently held annual CrimeStoppers International conference in Alberta, Canada.

At a media conference yesterday held at the Chamber of Commerce in Westmoorings, CrimeStoppers chairman Darrin Carmichael said the awards bestowed on the organisation in the productivity category could not have been achieved without the dedicated police efforts.
“The police are integral to how calls are handled and investigated,” Carmichael said.

Carmichael said that CrimeStoppers was usually able to get the police to “deliver on a tip within 21 days”.
Apart from the productivity awards the organisation also won the coveted Co-ordinator of the Year Award, which went to the organisation’s general manager Devrol Dupigny.

Carmichael said Dupigny was nominated for the award for efforts in 2004 to obtain more than $1 million in funding which was used to promote a gun retrieval programme and other initiatives to combat crime.

Awards were also received for the most increases in calls, cases cleared, stolen vehicles recovered and arrests made.