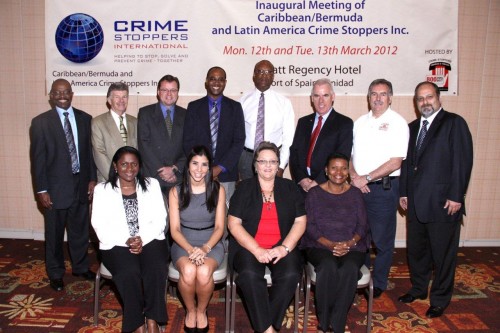 The opening ceremony commenced at 9:00 a.m., under the chairmanship of Mr. Garland Samuel, Executive Manager of Crime Stoppers Trinidad and Tobago. The feature address was delivered by the Minister of National Security of Trinidad and Tobago, Brigadier John Sandy, who congratulated the delegates on their efforts to assist in the control of crime in the various island states of the Caribbean -. He further observed that the formation of the new regional entity should be seen as “a vehicle for crime stoppers to gather information … through anonymous reporting”. He reported that “since the establishment of Crime Stoppers Trinidad and Tobago in 1999 more than 16,000 tips were received and more than 7,000 cases of crime were solved”. He advised that issues of crime, safety and security were all topics that engaged the attention of political leaders, at the local and regional level, particularly where these issues had the potential to negatively impact the realisation of our economic survival as a people and challenge our ability to earn foreign exchange through our tourism products and services. He exhorted those gathered to continue to provide support to the respective law enforcement agencies and explained their role as invaluable to national and regional safety and security.

Mr. Alex MacDonald, Chairman elect of the new regional body, explained that Crime Stoppers has a pivotal role to play in the maintenance of law and order, civil living and good governance in the region. This he said could be done by assisting police organizations in solving crimes through the collation of information and the effective utilization of online and confidential telephone tips. He emphasised confidentiality and anonymity as critical to the effectiveness of the Crime Stoppers programme and identified it as a viable option for persons with information on crime. He further observed the regional chapter of Crime Stoppers International as once consisting only of four islands but now boasts a membership of twelve National Programmes. He explained that in its current state, the regional body was the largest gathering of National Programmes in Crime Stoppers International, and reported that St. Lucia and St. Kitts and Nevis were well on the way to become members. He urged delegates not to be complacent but to forge forward in their efforts to provide a meaningful service to police organizations, while providing an environment for the people of the region to live, work and engage in business.

Mr. John Aboud, Chairman of Crime Stoppers Trinidad and Tobago and Vice Chairman elect of the new regional body, expressed optimism about the future of Crime Stoppers and challenged delegates to consider programmes that are realistic, achievable and that reflect relevance to each territory. This he observed as critical since crime and criminal activity has no boundaries, hence the formation of the new regional body which he stated, “provides greater scope for improved collaboration between Crime Stoppers and police agencies, as they work in unison, to assist with the management of crime at both the national and regional levels, through engaging public support and anonymous tips”.

By the end of the second day of deliberations, delegates had identified strategic goals, objectives and endorsed an organizational structure to support its projections for growth, effectiveness and efficiency in the region. It was agreed that one delegate from each National Programme would serve on the Board of Directors and the following persons were elected to serve on the Executive Committee;

The following persons were also identified by the Executive Committee to chair the following Sub-Committees;

By the conclusion of this inaugural meeting, delegates had acquired valuable information, developed informal linkages and appeared energised to do the business of crime stopping in their respective countries. Listed below is website information in respect of each Crime Stoppers Programme in the region.